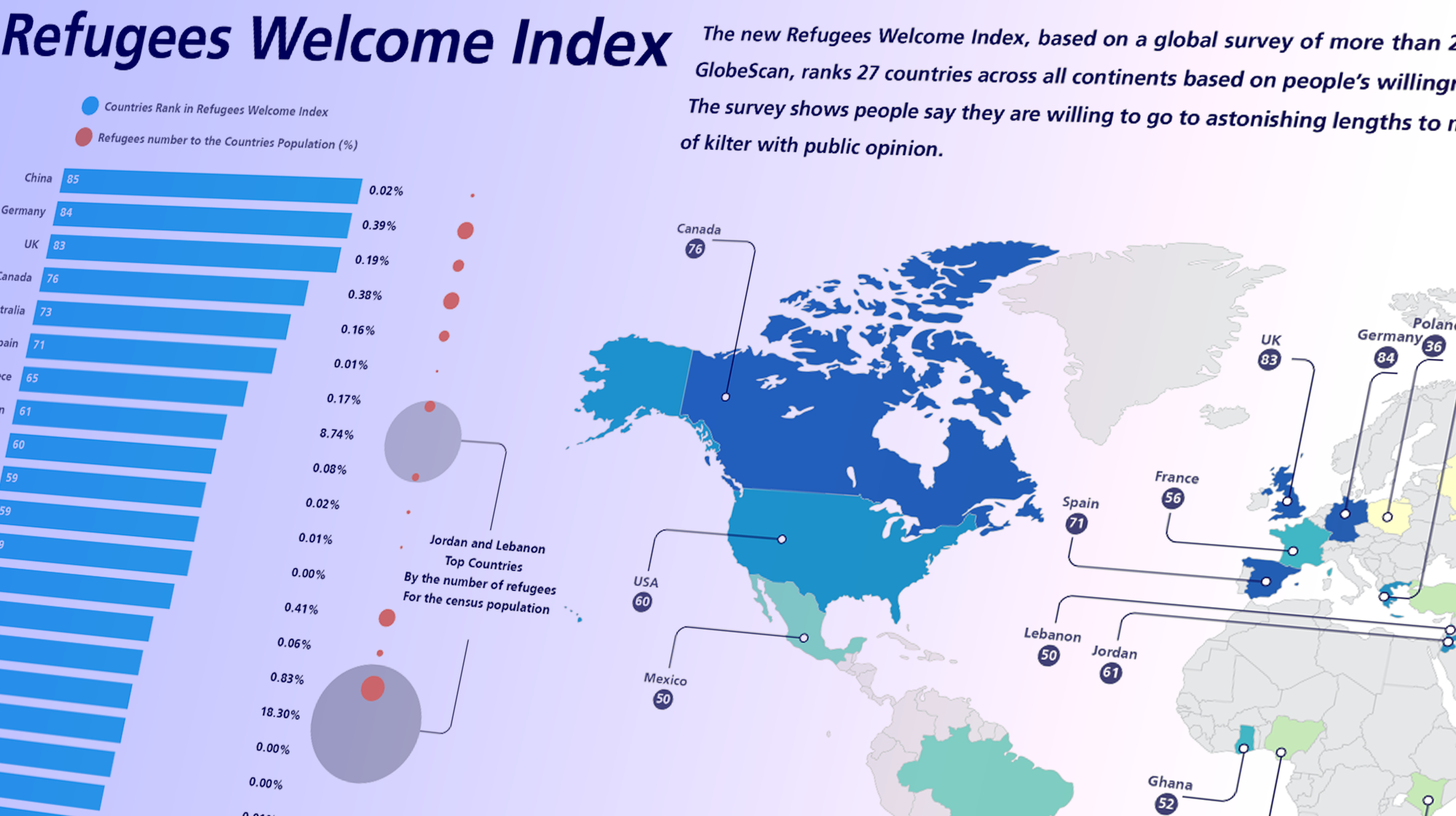 Are the World’s Most Welcoming Countries Taking in Enough Refugees?

In the last couple of years, the world has experienced one of the greatest mass movement of people since World War II. There are currently 65.3 million displaced people in the world, with 21.3 million of that figure attributed to refugees.

Europe had declared a “refugee crisis” in 2015, with more than 1 million refugees fleeing to the European Union from war-torn Syria and other troubled countries.

However, while it is important to know in numbers just how big this crisis is, it is just as important to know the degree of hospitality of the countries receiving the influx of refugees. Using data from a GlobeScan survey of more than 27,000 people across 27 countries, the figure above attempts to answer questions such as Which country should refugees consider as a new home based on its hospitality? Which country is least hospitable to refugees? According to the survey, China is the most welcoming country to refugees globally. However, China has one of the lowest percentages of refugees as part of the country’s total population at 0.02%. For example, if China were to host all 4.7 million Syrian refugees, it would only amount to 3.5 refugees per every 1000 inhabitant. While China has largely blamed Western countries for the plight of refugees, a report by Foreign Policy claims “the country still lacks related national institutions” that would support any incoming refugees.

On the other hand, globally, Lebanon has the highest percentage of refugees as part of its population, standing at 18.3%. However, the country ranks 16th out of 27 countries in terms of hospitality to refugees. The high percentage of refugees in Lebanon is attributed to the Syrian Civil War spillover effect, while its inhospitality could be attributed to rising tensions between Syrian refugees and the Lebanese population who fear that Muslim refugees pose as a security threat to Lebanon’s large Christian population.

Similarly, Turkey hosts the third largest percentage of refugees as part of the total population, while ranking 22nd out 27th on the hospitality scale. Tensions have been rising lately among the Turks as a result of President Recep Tayyip Erdogan’s recent announcement of plans to grant citizenship to skilled Syrians. This plan, which many deduce is a ploy to increase Erdogan’s voting base, was met with anger and outright racist remarks from the Turks.

Officials have even said that Turkey is set to build “a gigantic wall to seal off the entire 900-kilometer border it shares with Syria.”

Russia ranked last among all 27 countries when it came to welcoming refugees, and has only absorbed 0.22% of refugees as part of its total population. Many of Russia’s refugees are mainly Ukrainians that date back to Soviet-time migration and the War in Donbass in 2014. However, Russia has contributed very little to meet the needs of Syrian refugees, even though its military involvement is significant.

According to the charity Oxfam, Russia carries around USD 717 million of the humanitarian burden stemming from the conflict in Syria. Nonetheless, Russia’s actual contributions were calculated to be 1% of that figure, the lowest percentage of any of the 32 donor countries surveyed.