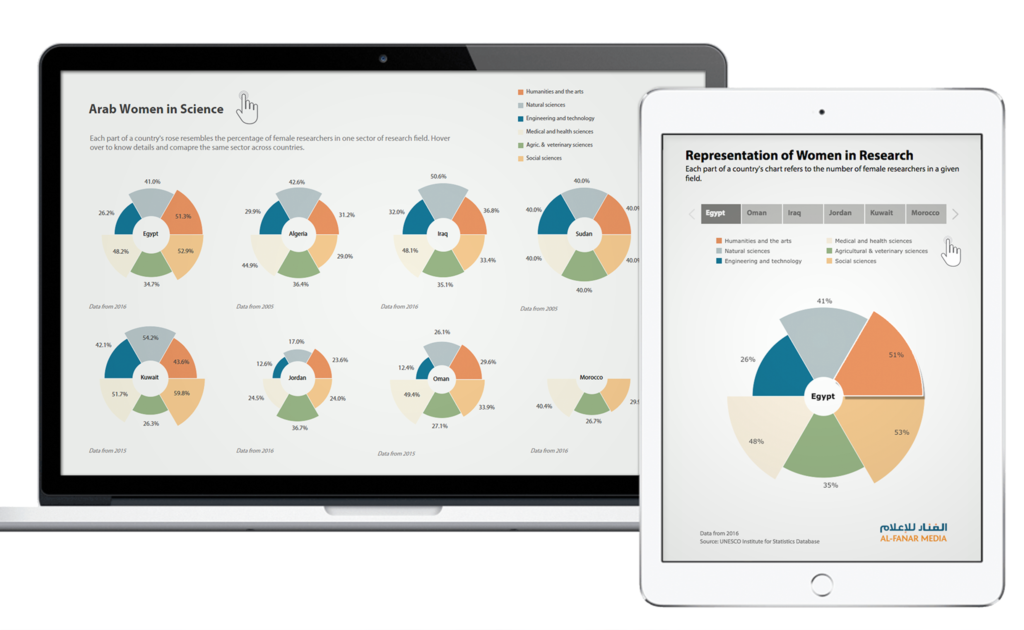 Behind the Numbers: Arab Women in Research

LONDON—The Arab region bests global averages in the proportion of women who work in research.

Just 28 percent of the world’s researchers are women, according to data from Unesco. Figures from the Arab world paint a more encouraging picture for gender inclusion, although some analysts warn the regional data may not tell the full story.

The average Arab country has 39 percent of researcher posts filled by women—that’s ahead of North America and Western Europe, where the average is 32 percent. The gap may have spread even more, given that some of the Arab data lags European data by many years.
The numbers vary widely within the region. Tunisia and Kuwait both have slightly more female researchers than male. Egypt also has relatively high levels of female participation, with a 44 percent female participation rate.  But just 23 percent of Palestinian and Saudi Arabian researchers are women.


The data used for the map above come from different years, which makes comparisons between countries difficult. For example, in Algeria, 35 percent of researchers are women, but that data is 13 years old and that proportion could have gone up or down. Other countries, such as Iraq, Jordan, Egypt, Tunisia and Morocco, have data from 2016.
UNESCO did not have data for Djibouti, Lebanon, Mauritania, Somalia, Syria, Qatar, United Arab Emirates or Yemen.

The first step toward encouraging female participation in research is ensuring that enough young women go to university. Gulf-based branch campuses of American and British universities have played a significant role in this, says Maha Al-Asmakh, the head of graduate studies and research at Qatar University’s College of Health Sciences.

Previously, families in the Gulf may have been happy to send one of their sons abroad to study, but they were comparatively reticent to send their daughters, says Al-Asmakh.
“Now we don’t have to travel to get a Ph.D., and that was a real barrier for women,” she says. “Things are much easier with branch campuses.”
She says that female students frequently outnumber male students in Qatar University classes.

While high numbers of women are enrolling as students in many Arab countries, their numbers diminish as they progress toward a career.

Qatar is an example. Almost three-quarters of its undergraduates are women and 54 percent of the country’s doctoral students are women, but just 31 percent of its researchers are female. A female first-year student’s chance of progressing to a research career is still significantly lower than that of a male student.

In Kuwait, many women say they experience a similar difficulty in progressing from being students to becoming professional researchers. But in Kuwait, unlike in Qatar, women are still well represented in research. Sixty-seven percent of undergraduate students in Kuwait are women, and  51 percent of researchers are women.

That relatively high percentage, however, masks obstacles women face in some disciplines and in some workplaces. Just 26 percent of agricultural researchers in Kuwait, for example, are women.

Other experts warn that the Arab world’s statistics on women in research should be treated skeptically. Gijsbert Stoet, a social-sciences professor at Leeds Becket University, is co-author of a study published earlier this year that describes a gender-equality paradox in science, technology, engineering and mathematics.

Using international data sets, the study describes a global pattern of decreasing female participation in STEM subjects in countries with high levels of gender equality, such as Scandinavian ones.


“I don’t necessarily think Arab countries are a good example for other countries to follow in boosting women in STEM,” Stoet says. “I’m not trying to be negative, but the alternatives are lacking.”

He argues that higher participation of Arab women in research, especially science-related research, may be less about encouraging women and more about a culture that doesn’t value the arts and business.

“In Arab countries the motivation is different than Western countries. When people feel their country is not developed, they say, ‘I want to make sure I can pay my bills and take care of my family, so I will go for a secure job,’” he says. “People know what a STEM job is. If you’re an engineer, then it’s respected.” But not all data necessarily agree with this view. Different fields of research conducted in Arab countries have different percentages of female researchers, and typically the social sciences, the humanities and the arts show fairly high numbers of women. Engineering, on the other hand, usually has lower percentages of female researchers. In Egypt, for example, more than half of social scientists are women, yet just 26 percent of engineers are women.

Al-Asmakh, who won the 2016 L’Oréal-Unesco “For Women In Science” Middle East fellowship, agrees with Stoet that despite the encouraging numbers, women in the region who want to be scientists face great difficulties. Society pressures women to take on more than their share of domestic duties, she says.

“There are more challenges for women. If you want to travel for a conference and you have young child, then it’s tough. Men can travel more freely without concern.”

“We have to balance our home life with our professional life in a way that a man would never have to,” she says.

Benjamin was previously editor of an online technology news magazine called The Connectivist, for which he executed a successful editorial strategy that expanded readership, established that publication within the technology world, and ensured high quality. Benjamin’s work has been published by Wired Magazine, CNN Health and Scientific American. He has a master’s degree in journalism from New York University with an advanced certificate in science, health and environmental reporting and a bachelor’s degree in biology from Imperial College, London.