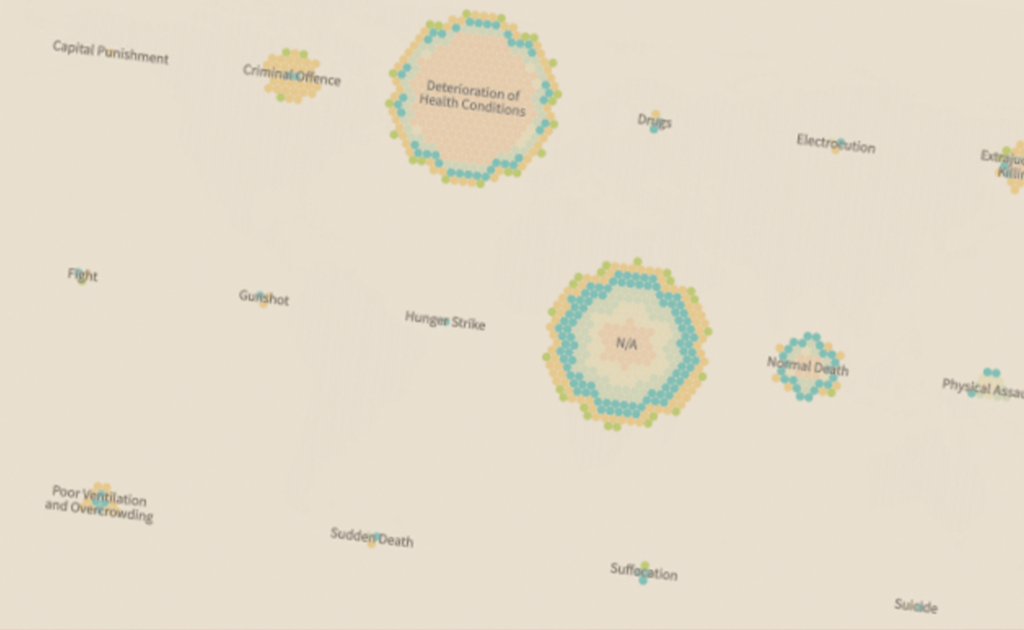 In August 2013, around 37 Egyptian detainees were squashed in the back of a police truck, held for more than 6 hours and gassed to death. The police officer who have fired the gas inside the truck was sentenced to 10 years in prison, but the same scenario has occurred multiple times and at least 834 lives were lost inside Egyptian prisons. This raises a lot of questions about the policies that regulate detention centers and the conditions in which detainees are kept; which is why we have been curious to look at some statistics regarding this issue.

Five year after the pro-democracy revolution in Egypt (between January 25th, 2011 and April 30th, 2016), the Daftar Ahwal Center for Archiving, Documentation and Research has documented 834 cases of death in 204 detention centers across 27 Egyptian governorates. According to the dataset; one detainee has died in every two days during the period of documentation.

The cases documented are cases of all the people who have died in detention centers; regardless of the lawfulness of their arrest. It’s important to note that these cases do not include prisoners who have been sentenced to death or those who have died while being prosecuted.

While 154 people -of those who have died in prison- were political detainees, the remaining 680 detainees were arrested on criminal charges. Among the detainees, there are 12 cases of victims under the age of 18 and 177 cases of people between 18 and 30.

Timeline of the Tragedies

The visual shows the timeline of the study. As indicated, the majority of the cases were recorded in 2011, followed by 2015.

When it comes to gender, in 99.9% of the cases that the DCADR has documented, victims were men. As shown in the visual, the majority of female victims have died in 2014.

As the visual indicates, 59% of the cases occurred during the presidency of Adli Mansour and Abdelfattah Al Sisi.

The death cases occurred in a plenty of governorates; but the majority of deaths took place in centralized areas, such as Cairo and Al Jizah.

There were a plenty of factors that led to the death of the 834 detainees. Although detainees who suffer from serious medical illnesses -that cannot be treated or managed inside prisons- should not have been detained, the DCADR documented around 207 cases in which victims had vulnerable medical conditions and 120 cases of deaths due to medical negligence.

Many causes of deaths, but there’s one thing in common between the different stories of deaths in-custody; it is that all of them were avoidable tragedies.