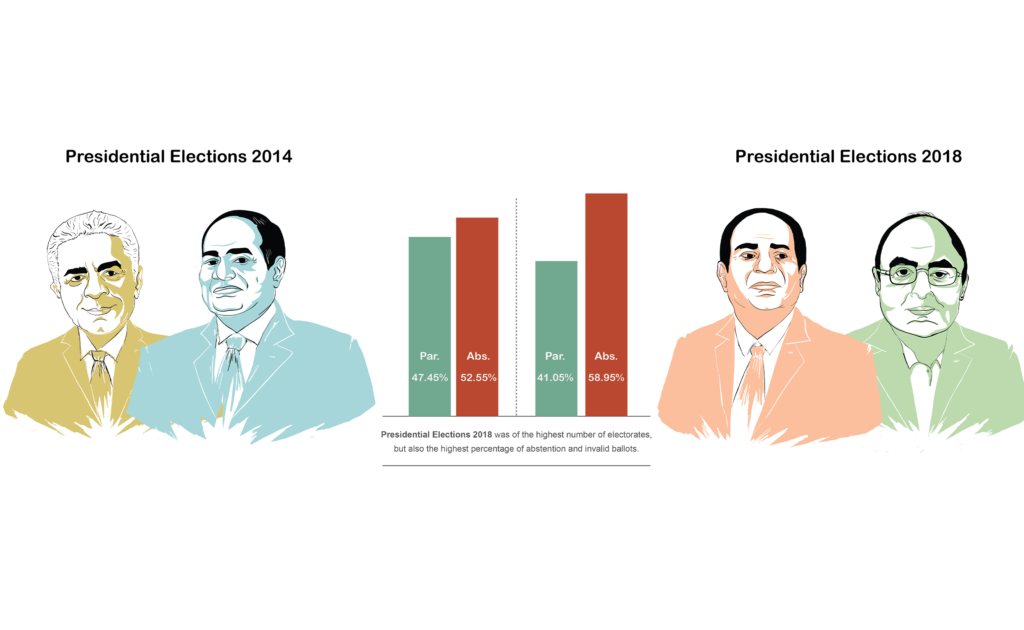 By Islam Salahuddin May 2, 2018 10 Mins Read
Egyptian presidential election concluded earlier in April, with a great-margin victory for President Abdel Fattah al-Sisi. About 24 million eligible Egyptians, out of 59 million, chose to go the ballot boxes. This means that 58.9% abstained from voting.
This lies near the average of abstention percentages across the eight previous elections and referenda since January 2011. The lowest abstention occurred in People’s Assembly Election 2012 with the percentage of 46%, while the highest was recorded for the Consultative Council Election that directly followed, with 87.1%.
However, it is normally more accurate to compare each category of elections and referenda within itself, as each one has its own political weight. Parliament elections are usually less important than presidential ones, for example.

In this piece, we try to explore the whole picture of Elections 2018, comparing it with the previous rounds on the governorates geographical level. We analyzed the available data to produce indicators that better describe the reality of political participation after more than seven years since January 2011, and we have also included comments and opinions from experts such as some Political Science professors and one of the heads of al-Sisi’s campaign.

This line chart illustrates how abstention level has developed since the first presidential referenda under the era of the previous president Husni Mubarak. It was below 21% across all the first four referenda under his regime. However, it is worth mentioning that this percentage represents those who did not participate out of the few who succeeded to register as voters. The registration process at that time was under the pressure of bureaucracy and regime restrictions, at least from the point of view of opponents.
Despite many complexities, the registration process continued during Elections 2005, the percentage reached unprecedented highs at 77%. This was the first multi-candidate presidential election in the Egyptian history. It witnessed 10 candidates lining up, but for a race with a previously-known result.

A Flourish data visualisation
Mubarak votes  far exceeded those of Ayman Nour, al-Ghad Party president at that time, as well as Noaman Gomaa, the prominent previous president of Al-Wafd. Political circumstances was full of calls and campaigns for abstention, organized by movements like Kefaya. The integrity of the election was normally questioned, especially that international supervision was not allowed.
Abstention level went down in the first presidential election after January 2011, recording just 53%. This was  also the first election that did not require previous registration. International observers on the ground praised the democratic event. It went even lower in the second round between the later candidates Muhammed Mursi and Ahmed Shafeeq.
However, it has been going up since then. It was up back to 53% in 2014. This was a part of the 3rd of July Road Map, that was implemented by the military after the previous president Mursi was taken off. Sisi and Hamdeen Sabahy were the candidates. A number of parties and political movements called for abstention, including Masr al-Qaweya Party and April 6 Youth Movement.
It further went up to 59% in 2018, recording the highest abstention since January 2011, and the second highest one in the history of Egyptian presidential elections.
The Spokesperson of al-Sisi’s presidential campaign youth arm, Yalla Sisi, Muhammadi al-Garhi, expresses that he refuses the initial idea of limiting the comparison among the presidential elections, referring to the fact that Election 2018 abstention was lower than abstention levels of other parliament elections and constitution referendum took place after January 2011.
At the same time, he justifies that abstention was higher than the previous two presidentials saying that ‘there was an undoubtful belief in the whole world that al-Sisi was going to win,’ because of his popularity and accomplishments that the other candidate, Moussa Mustafa Moussa, had nothing alike to offer.
Political Sciences professor at Cairo University, Mustafa Kamel al-Sayed, partially agrees with al-Garhi. He adds that the general feeling of the absence of ‘real competition’ between the two candidates does not encourage a lot of people to go to ballots.
Al-Sayed also says that the ‘deteriorating’ economic status of the country was another factor leading to abstention. “People did not find a person who really represents them and their priorities,” Al-Sayed said.
In addition, there were no real campaigns on the ground. “The president himself did not participate in his own presidential campaign,” he added.

Al-Garhi explains that Election 2012 had lower abstention rate because the youth in particular insisted on participating in the election, believing that it was a part of their revolution. “That kind of feeling was not present at the same level in 2018,” he said.

Al-Sayed continued that the first presidential election after January 2011 had less abstainers because it had  a real competition with real presidential campaigns on the ground. “Furthermore, the economic status was no as bad as today,” he believes.

The following interactive maps uncover a number of indicators. For example, we can see Great Cairo, Delta and Canal governorates were of low abstention percentage in Election 2012. This cluster of highly active governorates has started to disintegrate in the last two presidentials, with the exception of Gharbia. Abstention rose up in Giza, for instance, from 47% in 2012 to 70% in 2018. In Suez, it went from 45% up to 60%.

Other governorates did not have a clear trend, like Kafr El-Sheikh. A few governorates were more politically active in 2018 than 2012. On top of them is al-Wadi al-Gadeed governorate that stood at 58% abstention percentage in 2012, and went down to 41% in 2018.

Move the slider to explore differences between each two maps

A Flourish data visualisation
View maps interactively
Red color resembles governorates of 50% abstention or more. The higher red value, the greater abstention is. Green color, on the contrary, resembles governorates of abstention less than 50%. The higher green value, the lower abstention is.
Comparing Election 2018 with itself, Aswan, Qena and Giza were of the highest abstention at 70%, North Sinai and Luxor followed at 69% 68% respectively.
On the other hand, al-Wadi al-Gadeed, South Sinai and Gharbia were of the least abstention at 41.2%, 48.3% and 49% respectively. Then comes Menoufia and Port Said that both recorded 52%.

This waffle graph details the five highest governorates that witnessed an increase in the abstention level between Election 2012 and Election 2018. Those five governorates, as stated in the graph, are Giza, Cairo, Alexandria, Suez and Damietta. On the level of change between these two elections, 20 governorates all witnessed abstention an increase. The remaining seven, namely are Beheira, Qena, Marsa Matrouh, Asyout, Kafr El-Sheikh, South Sinai and al-Wadi al-Gadeed.

In addition to the rise of abstention rate, the last election had the highest percentage of invalid ballots among all the presidential campaigns and referenda, starting from Presidential Referenda 1981. The percentage has been rising especially since 2011, recording 3.7% in the first round of Election 2012, 3.1% in the second round, then up to 4.1% in 2014 and further up to 7.3% in Election 2018.
The following maps show how the percentage has increased all over the republic. It rose especially in border and canal governorates, while governorates on the bank of the nile specifically remained below the average.
For example, invalid ballots rate increased in South Sinai from 2% in 2012 up to 7.1% in 2014, and then up to 13.2% in 2018. Suez witnessed an increase from 2.3% to 7.2% and then to 13.9% in 2018. Al-Bahr al-Ahmar invalid ballots percentage also rose from 2% in 2012 to 4.2% and then to 11.1%.
On the west border governorates, Marsa Matrouh governorate invalid ballots increased from 1.7% in 2012 to 8.7% and up to 10.6% in 2018. Al-Wadi al-Gadeed went up from 1.9% to 5.7% and then to 9.2%.
Move the slider to explore differences between each two maps

A Flourish data visualisation
View maps interactively
Governorates that have invalid ballots percentage above the average, 8.2%, are colored in orange. Governorates below the percentage are colored in blue. The deeper the color, the nearer the governorate to the end of the scale.
Governorates that were of the highest ballots in 2018 are Port Said, invaliding 15.2% of its ballots, which is the highest invalid ballots percentage ever recorded by any governorate during the three presidential elections.
Suez, North Sinai, al-Bahr al-Ahmar and Marsa Matrouh follow with percentages 13.9%, 13.2%, 11.1% and 10.6% respectively.
The lowest invalid ballots were in Daqahlia, Menoufia, Qena, Kafr El-Sheikh and Luxor at 5.1%, 4.8% 4.7%,4.2% and 4.1% respectively.

This waffle graph details the highest five governorates that witnessed an increase in the level of invalid ballots between Election 2012 and Election 2018, namely are North Sinai, Marsa Matrouh, Suez, al-Bahr al-Ahmar and al-Wadi al-Gadeed. They are all border and canal governorates. All other governorates witnessed rise in the percentage between these two elections, without any exception.

In this graph, we can see that the decrease of abstention rate in the previously mentioned seven governorates; Beheira, Qena, Marsa Matrouh, Asyout, Kafr El-Sheikh, South Sinai and al-Wadi al-Gadeed, did not necessarily mean an increase in the level of positive participation. In North Sinai and al-Wadi al-Gadeed, for instance, the increase in voters number led to an increase in the invalid ballots at the same time. On the other side, Cairo and Giza represent the worst case, in which the number of voters decreased and invalid ballots increased. In both cases, invalid ballots recorded high increases of at least 40%.

Al-Sayed explains the increase of invalid ballots rate in the last elections that some of the voters went to ballots because of some external pressures from their places of work, aiming for financial incentives or for fear of being fined EGP500 ($28), the fine that the press circulated it was to be applied sourcing officials from National Election Authority (NEA).

The Political Sciences professor believes that some others who invalidated their ballots meant expressing their outrage of what happened with the previous candidates Ahmed Shafeeq and Sami Anan.

But for Al-Garhi, “the high percentage of invalid ballots means higher percentage of freedom,” he says. “Anyone could go to ballots and express their opinion.” He added that it also emphasizes that there the election was not rigged.

At the same time, the pro-Sisi young man thinks that the figure may also indicate that there is a group of people who are not satisfied with the status quo. “But this is normal. This happens in the whole world,” he believes.