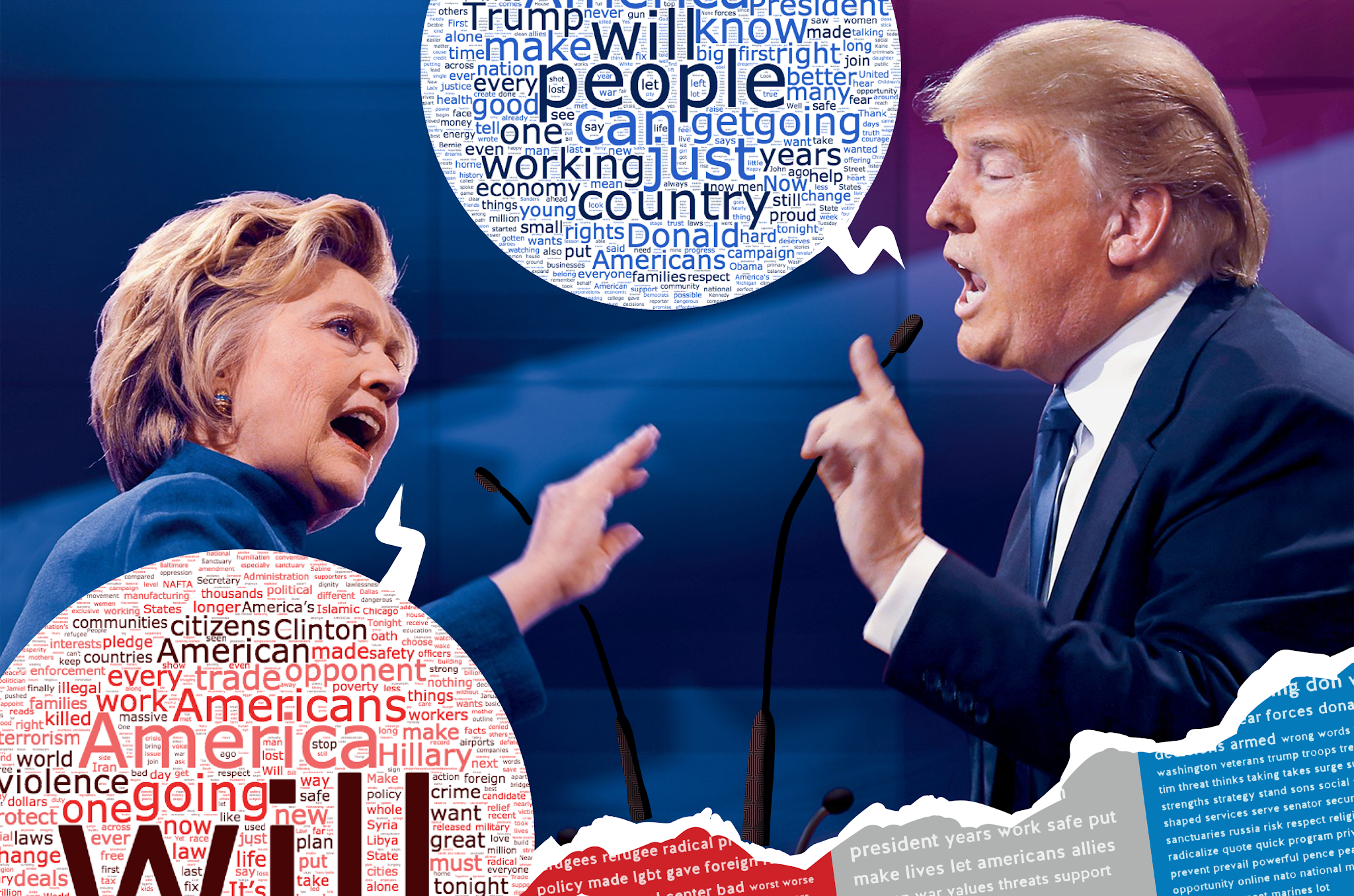 One Speech Enlightens The Main Agreement and Disagreement Points

The presidential election in the United States becomes everybody discussion and the topic of the global media. Everyone asks who are the best one to lead the strongest country in the world. There are two candidates running for the election, Hillary Clinton represents the Democratic party and Donald Trump represents Republican party -the two largest parties in the United States-. The difference between both is prominent to everyone but analyzing both speeches will give us a deep look at the differences and also the similarities between Trump and Clinton. The selected speeches are the first one for both in front of their supporters on 28 July.

Who says what?
Small words and common sentences

In their speeches Clinton spoke more than Trump, she used in her speech in 28 July more than 5,200 words which accounted for around 400 sentences compared to 4,411 words which accounted for 269 sentences that Trump used in his speech in 21 July. The words they used to present their policies and thoughts to the most popular issues that the public opinion cares about such as security, economic situation, health care, and freedom. Trump spoke generally without going into details in many topics that the American citizen cares about. He didn’t give a plan or a strategy in the topics he talked about. Actually, the majority of his speech was criticism and a lot of promises without showing his strategy to fulfill them. As the above cloud word of Trump speech shows that the most repeated word he said in his speech was “WILL”. In contrast, Clinton stressed on clear plans and said many details about her economic and political programme and the capability of the American people’s will to make the change.

Although the fundamental difference between Clinton and Trump in their strategies and political views but there are many common issues mentioned in both speeches. Both of them spoke about terrorism but in a different number, Iran also was a common issue but they talked about it from different perspectives. They stressed in the American local issues and the economic policies had a pivotal place in their speeches. Even Though Clinton appeared to be more aware of the economic situation and discussed how to improve the American economy in details which Trump avoided going into details and just said titles and general words about all the mentioned topics.

According to Clinton, in order to increase economic growth in America requires to increase the equality in social standards through raise the minimum wage per hour and increase the taxes on the rich people, which amuse to a lot of Americans.

On the other hand, Trump sees that the taxes should be equal on everyone and decrease the taxes on the rich which will expand their investments and create jobs which will decrease the unemployment rate in the country.

Both candidates are recriminating to each other in a lot of times and they accuse each other and in Trump speech he criticized that Barack Obama and Clinton as she was his foreign minister destroyed the country and weakened Washington’s relations with its allies like Israel in favor of Iran. in addition, he accused Clinton of deception the American public opinion through Benghazi attacks which caused death to American ambassador and three others. On the other hand, Clinton accused Trump that he is a discriminating and anti-semitism. Clinton questioned his ability to be the leader of United States while he failed in his private business.

to show how each one is more fitting to be president. In addition, his call to ban Muslims from entering America and to put mosques under observation and maybe close some of them in the United States. But Clinton is moderate, she urged to respect all religion and none of them can be banned based on moral principles that the United States founded on.

Trump promised in his speech to make a fundamental change in the middle east under slogan “ America first” and promised to eliminate ISIS without saying any details.

On the other hand, Clinton gives a certain strategy consists of three parts to deal with ISIS. the first part is beating ISIS in Iraq and Syria through increasing the intelligence operations and increasing the NATO air strikes and increase. While Trump confirmed in his speech in the feud between the United States and Iran and wondered about the relation between the United States and Iran.